As Hurricane Ian recently reminded us, hurricanes are a fact of life for those living near coastlines or on islands. Looking back through history, hurricanes have affected the islands of Charlotte Harbor since the coming of 19th century fishing camps and the development that followed in the 20th century.

In his book Fisherfolk of Charlotte Harbor, Florida, Robert Edic cites studies that report 64 tropical disturbances affecting Florida between 1830 and 1900 and 88 between 1900 and 1955. The report also notes that 30 hurricanes or tropical storms have passed within a 50-mile radius of Charlotte Harbor in the same period.

According to an unpublished monograph by Anthony B Arnold, the 1910 hurricane with heavy rains “washed out two or three miles of soft, freshly made CH&N railroad embankment along the upper Peace River.” It also destroyed the homes of John Padilla and Walter Coleman on Punta Blanco and, according to the late Thomas Parkinson, the two men crossed the harbor to Cayo Costa on the roof of one of the houses. Captain Carey Johnson in his book Boca Grande The Early Days tells that his father, a port pilot, alerted those who lived at the port and the group walked through wind and rain taking two hours to cover the two miles to town and shelter in the Little Inn. Damage in town included the under-construction brick bank building at Fourth Street and East Railroad (much later the United Telephone building).

Charles Dana Gibson relates how the hurricane killed all but one member of a crew estimated to be more than 40 on an estimated eight Cuban fishing smacks. “As the 1910 hurricane approached Charlotte Harbor, a number of Cuban fishing vessels took shelter on the harbor side of Cayo Costa. Realizing that they would soon be on a lee shore if they stayed at Cayo Costa, the Cuban skippers decided to run up under the protection of Bokeelia…By the time the wind reached its maximum velocity, the smacks were fully exposed to the brunt of steep seas building up over the width of Charlotte Harbor. Anchored as they were in shallow water, their keels began to pound harder and harder against the bottom and one by one, the smacks broke up.” Drowned bodies washed ashore on Cayo Costa in an area afterward known as Dead Man’s Cove.

By the 1921 hurricane, the island was much more developed. It included Port Boca Grande, the town Boca Grande and Gasparilla Village at the north end of the island. The storm flooded many areas of the island and destroyed the Gasparilla Inn’s bathhouse located at the gulf end of Fifth Street, approximately where the Beach Club is today. The water flooded streets in town, washed out the railroad tracks at the Narrows just north of town, damaged the phosphate dock at the Port and according the Albert Lowe in a 1980’s interview with the Boca Beacon, destroyed many of the homes on Cole Island (now Boca Grande North).

In 1926 the hurricane that drowned 130 people in Moore Haven in the southwest corner of Lake Okechobee again damaged the facilities at Port Boca Grande. According to authors Lindsey Williams and U.S. Cleveland, “the most curious effect was blowing all the water out of upper Charlotte Harbor as the storm approached, then blowing it back to flood Punta Gorda and Charlotte Harbor Town as it passed.” This hurricane washed away a large portion of the beach of Boca Grande and resulted in the building of seawalls to protect beachfront land. The Inn bathhouse which had been rebuilt was damaged a second time.

Carey Johnson’s book also describes the 1935 hurricane which decimated the Keys. He writes that a 10,000 ton Japanese freighter, the Norfolk Maru, was being loaded with phosphate as the hurricane approached. “The pilots were asked to move the ship away from the dock as she was beginning to roll and lurch against the pier.” The pilot, Captain Kingsmore Johnson, crawled out the dock to the ship but the wind and water were so fierce that even under full steam they were unable to move the ship from the dock. The ship stayed at the dock until the weather abated.

The 1944 hurricane originated in the Caribbean, crossed Cuba and made landfall in the Charlotte Harbor. This storm destroyed many of the tall pine trees that once shaded downtown Boca Grande and washed out the road at the south end of the island. Again it took out about a mile of railroad track at the Narrows and two railroad boxcars were moved about a block by the winds according to Tommy Parkinson. Gene Bowe later told the Beacon that “All the wires were down. Water came clear across the south end of the island. The wind leveled just about everything.” The road at the south end had been flooded many times and in 1989, the curve around what is now South Beach was abandoned and the road relocated to where it is today.

In the second half of the 20th century, in the early 21st and most recently with Ian, the island weathered named and unnamed storms with various degrees of damage but continued to grow in spite of hurricanes. 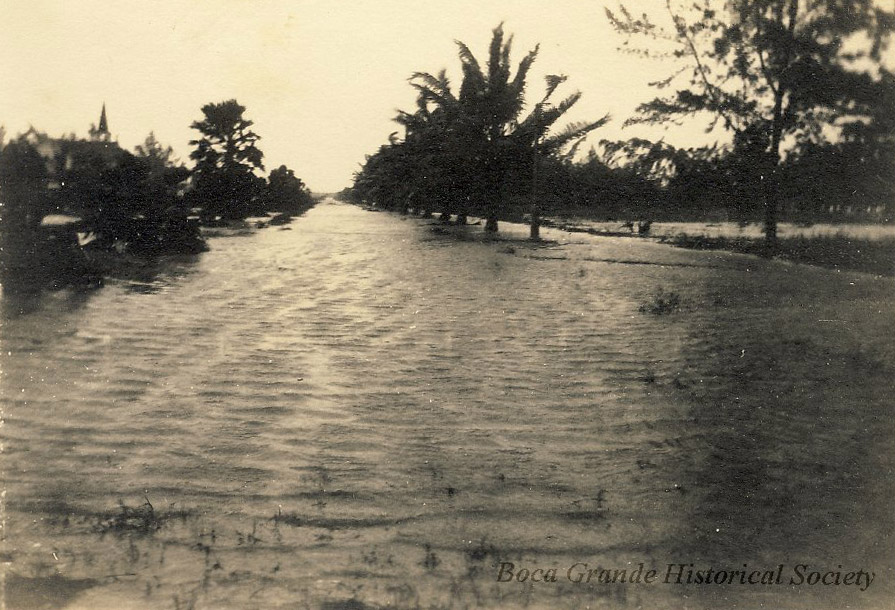 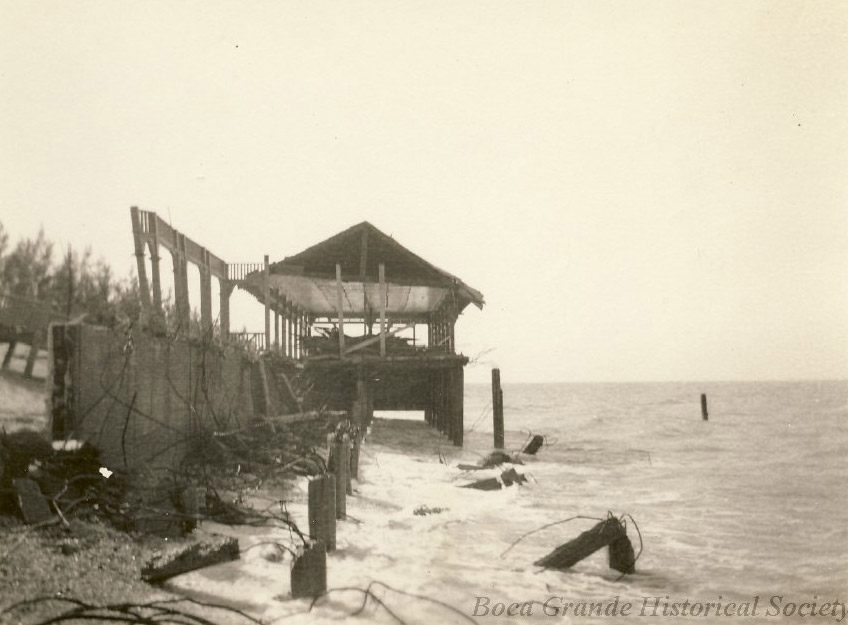 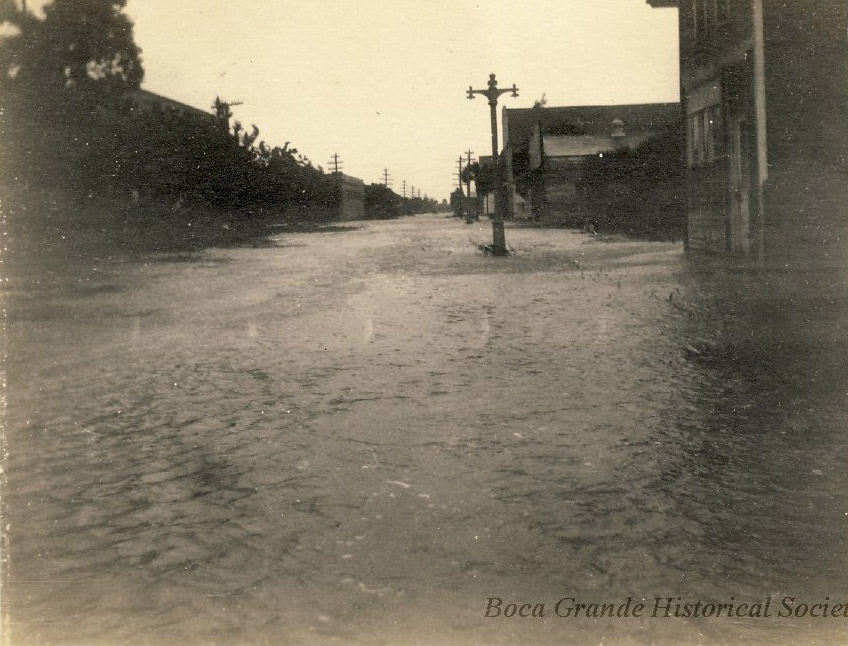 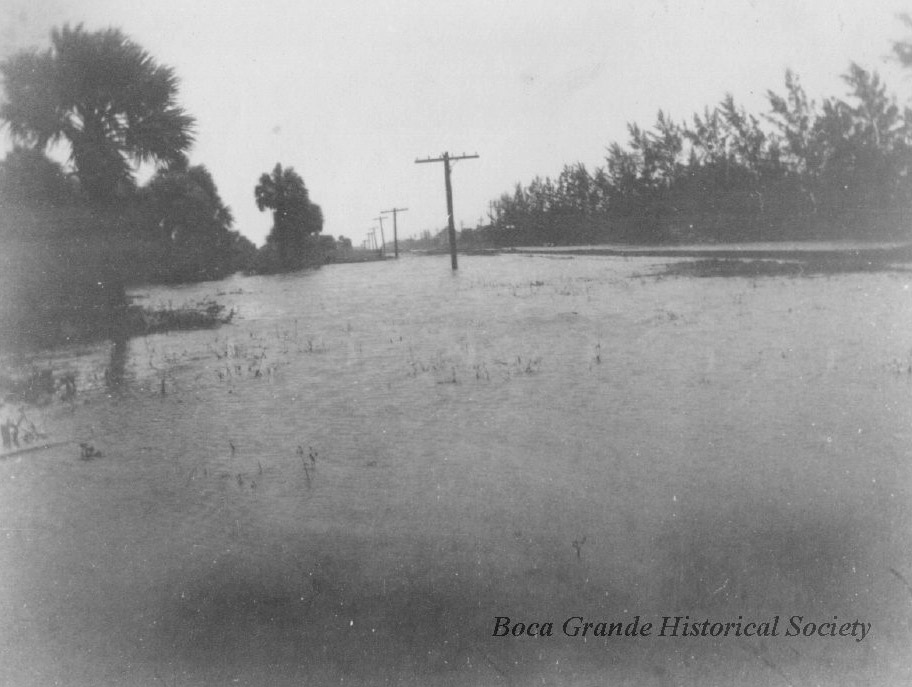 Flooding over the railroad tracks (now the bike path) 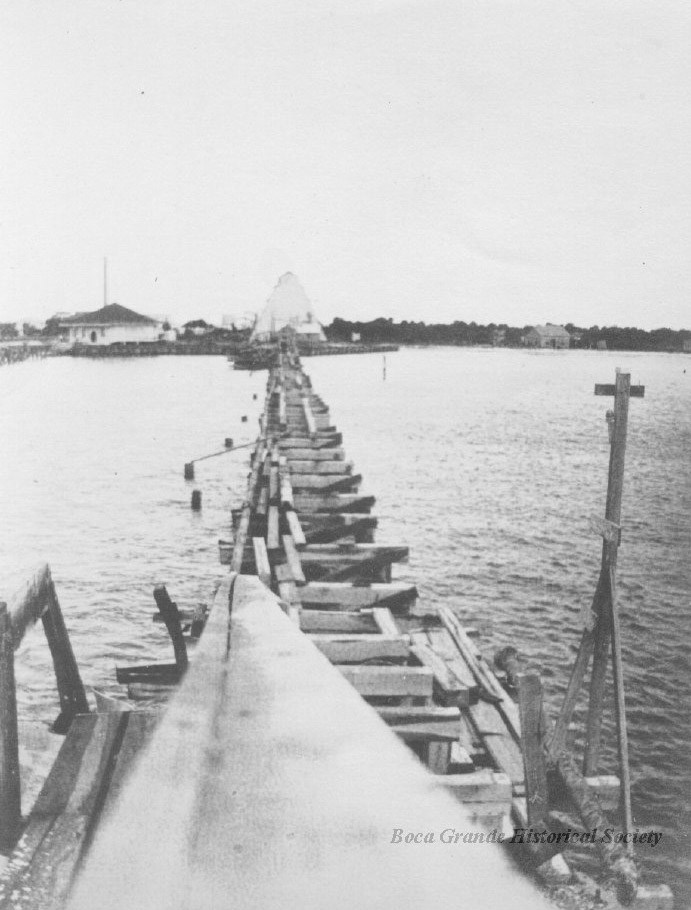 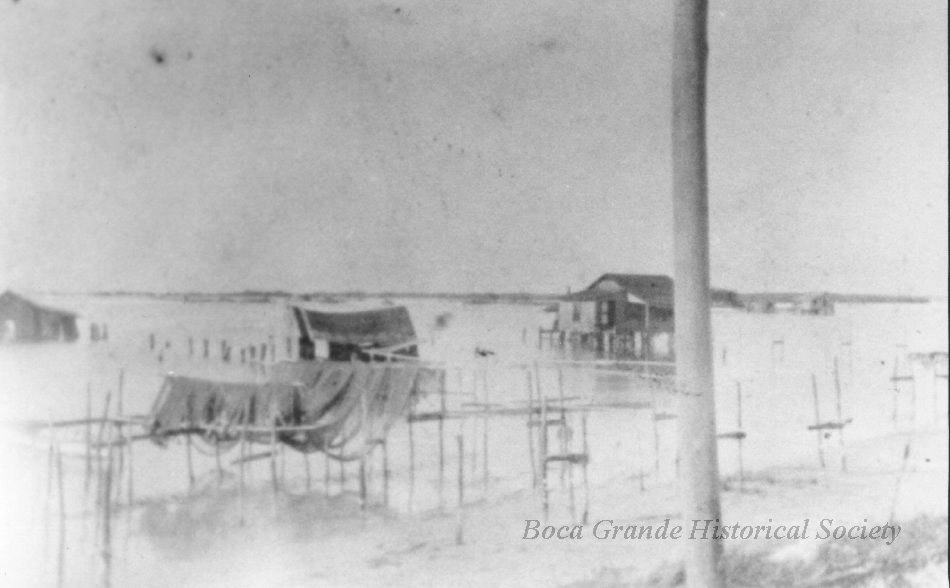 Stilt houses at Gasparilla Village (north end of the Island)