When Spanish fishermen returned to the area in the 1600s, they discovered the real treasure of Charlotte Harbor; the rich fishing grounds. Cuban/Indian “fish ranches” were set up by the Spanish to harvest fish for markets in Cuba. The Spanish introduced their own method of curing fish by drying and then packing them in salt.

In the 1870s, a permanent fish camp called Peacon’s fish ranch was established on the north end of Gasparilla Island. The mullet and their roe were processed and shipped to Cuba. It was the first pioneer settlement on the island. 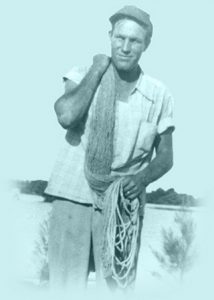 The Red Gill Fish House was built in 1909 on a long dock at the end of 1st Street. In 1926 it became part of Whidden’s Seafood Market and now the location of “The Gasparilla Island Maritime Museum.”

Around 1914, a fish house was built at the railroad stop just to the north of Peacon’s fish ranch. The railroad built 16 houses to attract fishermen and their families. This new village was known as Gasparilla. It was supplied with ice from the mainland, and the fish were packed, and shipped by rail. Peacon’s fishery was soon abandoned. Dependence on ice shipments and rail transportation finally ended when the Gasparilla Fishery built their own ice plant in Placida in 1944 and shipped iced fish north by truck. All the land at the north end of the island was sold to a developer in 1945. However, a few fishing families continued to live in Gasparilla until about 1956.

A fish house located on the East Dock at the end of 4th Street was leased by the Gasparilla Fishery in 1939 and called the Boca Grande Fishery. The fishery had a retail market in town and it was later relocated to Bayou Drive and closed in 1990.

In November 1994, a net ban was approved by Florida voters, which made it unlawful to use entangling nets in State waters. This ban brought an end to a long tradition of commercial fishing on Gasparilla Island.