This timeline is intended to aid docents and visitors to the Boca Grande History Center as they journey through the unique history of Gasparilla Island. Previously written timelines have been combined with the results of additional research in order to provide a more comprehensive timeline. Please note that this timeline is a “work in progress” and, also, different source materials often contain conflicting dates for specific events and developments which contributed to Boca Grande’s rich history. Your corrections, comments and suggestions are welcome and can be emailed to archives@bocagrandehistoricalsociety.com.

Special thanks to Kim Kyle, BGHS Administrative Director, for devoting time to proofreading the initial drafts of Edition 2.

Florida emerges from the sea.

Gasparilla Island in its present location is not more than 3500 years old.

Archaeological sites found here date from circa 300 to the Seminoles of the 1830s.

Over 12,000 years of indigenous Native American culture disappeared within 200 years after first contact with the Spanish explorers in the 1500s.

By mid 1700s the Calusa had vanished from the area; other Indian groups fleeing from the north arrived and occupied the area formerly used by the Calusa.

Phosphate was discovered in the lower peace river valley

Phosphate was Transported Down the Peace River

Phosphate was transported down the Peace River to Charlotte Harbor in barges where it was transferred onto ocean-going ships near the deep water of Boca Grande Pass.

Story told that changed Boca Grande; sportsman from New York caught a 93-pound tarpon at mouth of Caloosahatchee river; created tourism and had an immense economic impact on S.W. Florida, including Boca Grande. 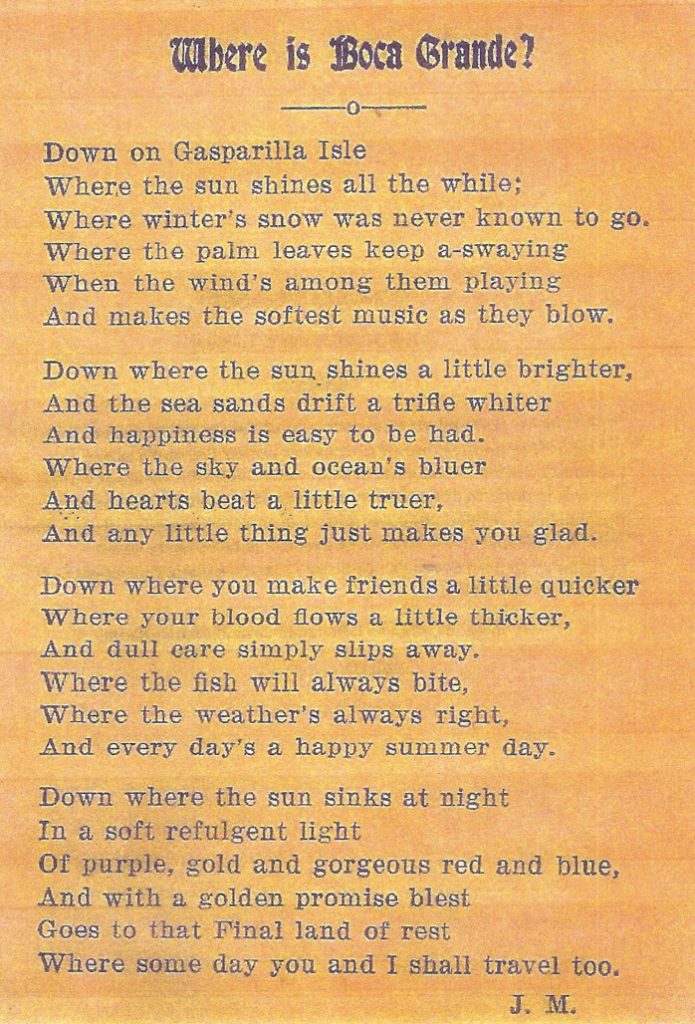 Where is Boca Grande? Down on Gasparilla Isle Where the sun shines all the while; Where winter’s snow was never known to go. Where the palm leaves keep a-swaying When the wind’s among them playing And makes the softest music as they blow. Down where the sun shines a little brighter, And the sea sands drift a trifle whiter And happiness is easy to be had. Where the sky and ocean’s bluer And hearts beat a little truer, And any little thing just makes you glad. Down where you make friends a little quicker Where your blood flows a little thicker, And dull care simply slips away. Where the fish will always bite, Where the weather’s always right, And every day’s a happy summer day. Down where the sun sinks at night In a soft refulgent light Of purple, gold and gorgeous red and blue, And with a golden promise blest Goes to that Final land of rest Where some day you and I shall travel too. J. M.
1887

Set up at north end of Gasparilla Island by captain Peacon from Key West (“peekin’s cove”).

Lee & Desoto counties carved out of Monroe (Lee) and Manatee (Desoto) counties, splitting Gasparilla Island into two separately governed areas, with Desoto County to the north and Lee County to the south.

Captain W.H. Johnson and Will Johnson sailed from Punta Gorda to Gasparilla Island and became the first pilots for the area.

Steamboat “Mistletoe” from Tampa lands on Boca Grande with engineers and laborers to start work of surveying and constructing the CH & N Railroad Line.

1906-1913 A.A.C.Co. increase their holding in the south by purchasing several well-established fertilizer plants.

Peter B. Bradley Became President of the AACC (A.A.C.Co)

Plat Document Reserves a Gulf-To-Bayou Strip In The Current Location Of The Gasparilla Inn, Confirming Plans To Build A Luxury Hotel 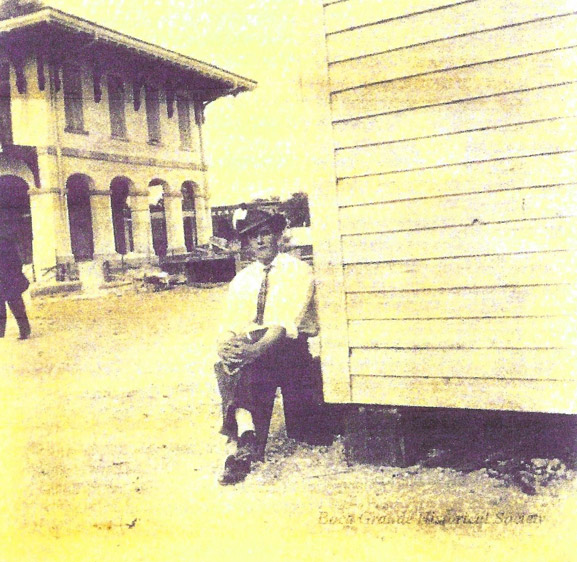 Boca Grande Land Company leased part of military reserve for a rental of $10 per year; Designated for “park purposes” to protect the island from lease-out to “undesirable elements”.

Black workers begin moving into area to work in shipyard, train yard, and fishing and building industries as well as serving as maids, gardeners, and caretakers for wealthy families. 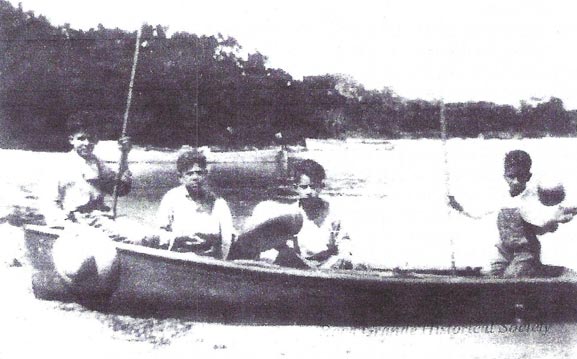 Fifth and Final Conveyance to the Ch & N in Boca Grande

Space first rented from churches on the island

Worked for Ch & N as a laborer

(Circa) Quick Hotel Opens for Business on Palm Avenue 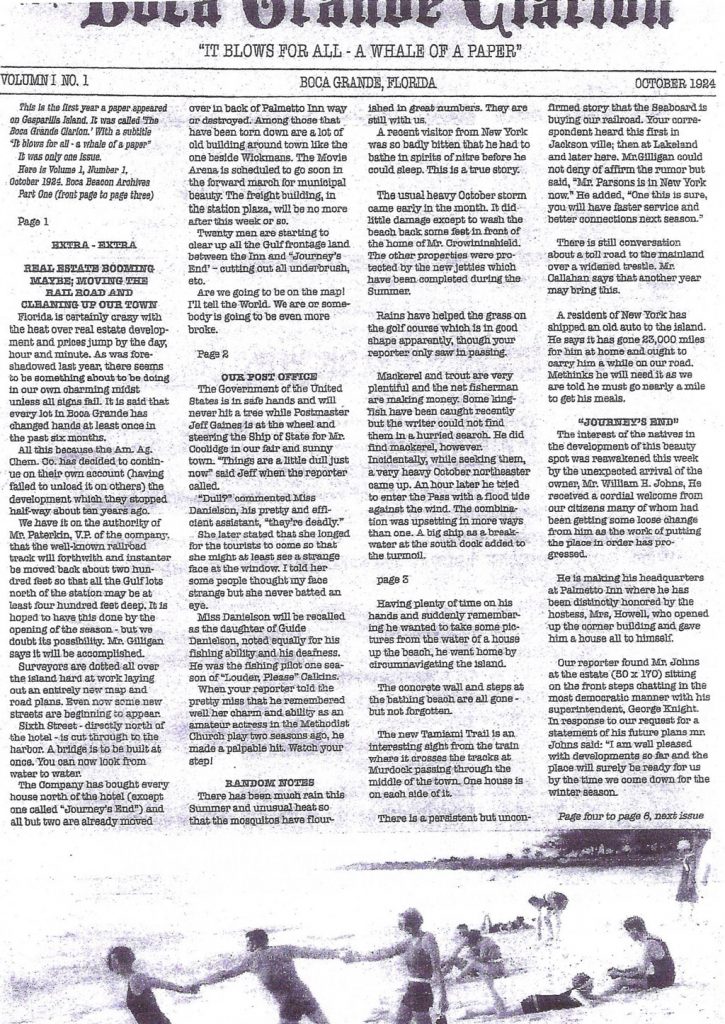 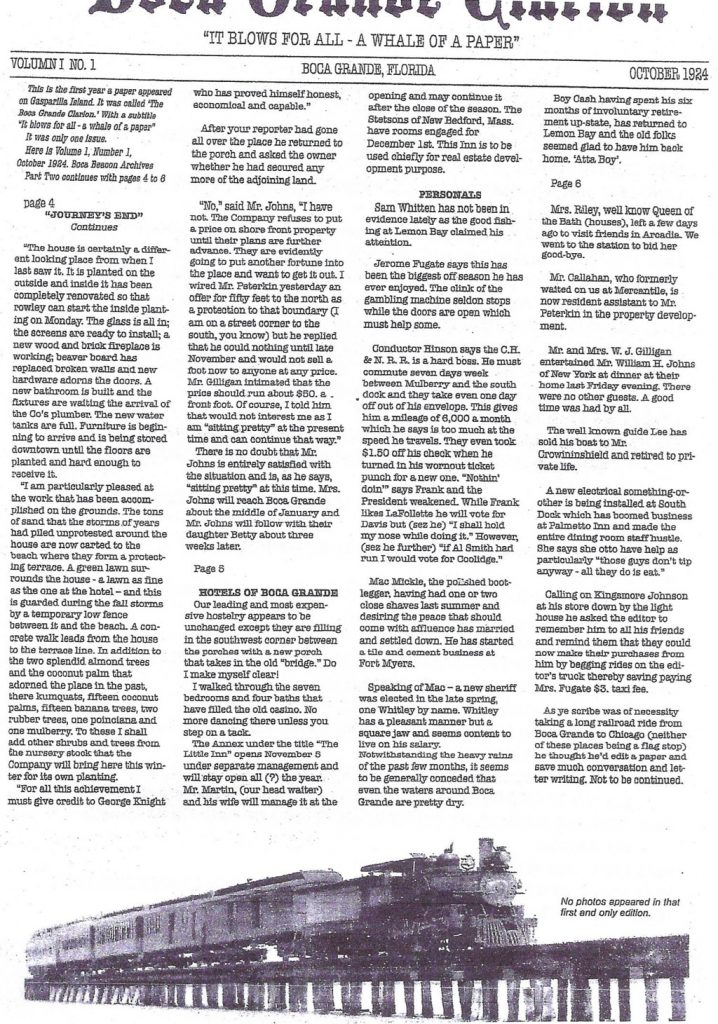 Building rented from seaboard airline R.R. for $25 per year. 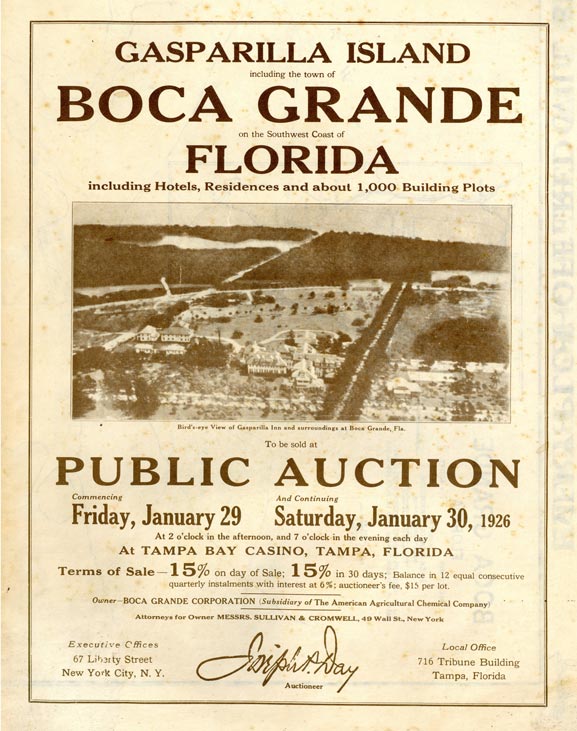 Narrows Pass “Dredged in” Converting Gasparilla Into One Island

Thus owning all of the reservation except the railroad right of way, terminal service tracts and the lighthouse services land. 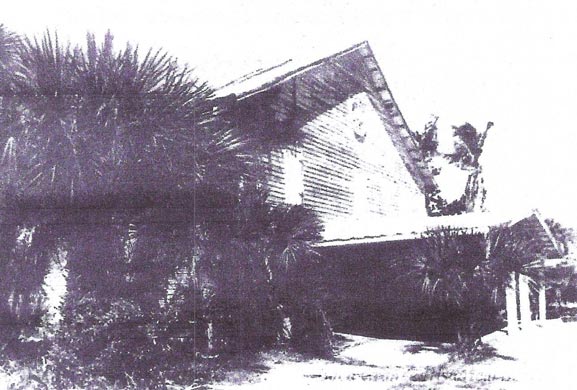 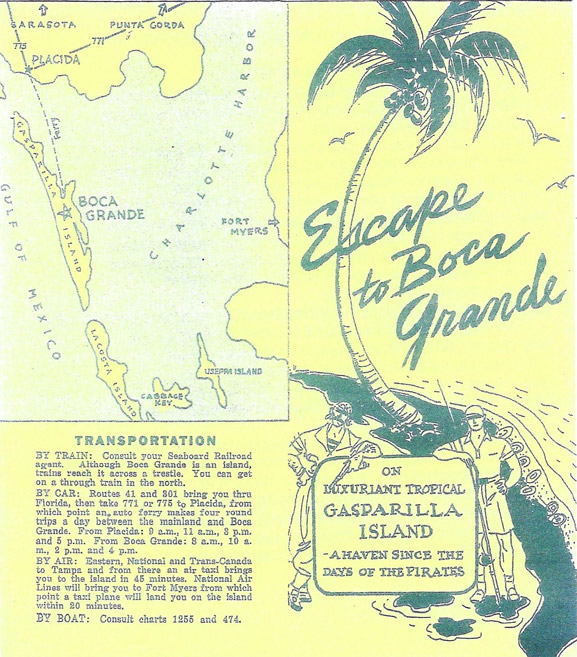 TRANSPORTATION BY TRAIN: Consult your Seaboard Railroad agent. Although Boca Grande is an island, trains reach it across a trestle. You can get on a through train in the north. BY CAR: Routes 41 and 301 bring you thra Florida, then take 771 or 775 to Placida, from which point an. auto ferry makes four round trips a day between the mainland and Boca Grande. From Placida: 9 ‘Min. and 5 p.m. From Boca Grande; 8 a.m., 10 a. m., 2 p.m. and 4 p.m. BY AIR: Eastern, National and Trans-Canada to Tampa and from there an air taxi brings you to the island in 45 minutes. National Air Lines will bring you to Fort Myers from which point a tazi plane will land you on the island within 20 minutes, BY BOAT: Consult charts 1255 and 474.

1932-1934 Spadaro Consolidates the Titles of All His Properties

Spadaro consolidates the titles of all his properties on Gasparilla Island military reservation under “Boca Grande Inn, Inc.”

December 17: Enlistment in the Service as Fireman

Group of Island residents signed a State of Florida document stating “We the undersigned citizens of Boca Grande, Florida, do hereby enlist in the Service as Fireman under the authority of the Local Defense Council of Lee County…”

August: First “Proper” Year of Firefighting on the Island

Little Inn Burns to the Ground

June 28: First meeting of the Boca Grande Fire Control Board 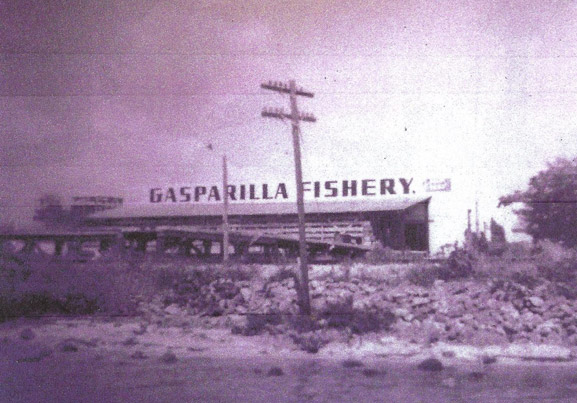 Walter Gault built The Gasparilla Fishery and Ice Plant, located on the mainland at Placida, FL in 1945 (he began shipping fish overland by truck).

“Pink Elephant” Opens as a Lounge on Bayou Avenue

Construction of Fire Station Begins in the Middle of Town

Roger Amory purchases theatre building, and as Health Clinic Secretary, he made a gift of full stock in the “San Marco Movie Theatre” on Park Ave. to benefit the Health Clinic.

1949-1963: Boca Grande Health Center Occupies a Space on West Side of Fugate Building

Claimants to Spadaro Estate File Suit Seeking $102,895 Or One Half Of Spadaro’s Estate

Anthony Spadaro inherits all properties deeded to Boca Grande Inn, Inc. and is elected president of the corporation.

Berth for Ships at Port Boca Grande and Storage Facility

FPL builds a berth for ships at Port Boca Grande and storage facility for incoming oil.

Closed in 1967 and the movies were transferred to the Community Center.

Health Clinic Board Transfers Operation of Movies to Community Center

All Properties That Were Owned by Boca Grande Inn, Inc. Are Acquired by Bayard Sharp and Hugh R. Sharp Jr.

Becomes Outlet at Innlet in 2001

Creation of the Gasparilla Island Conservation and Improvement Association (GICIA)

Under a special bill passed by Florida legislature, Boca Grande school deeded to community as Community Center; Women’s Club and GICIA enters into agreement with Lee County Board of Commissioners to jointly fund the restoration and development of the property.

Village of Gasparilla on the Railroad Tracks 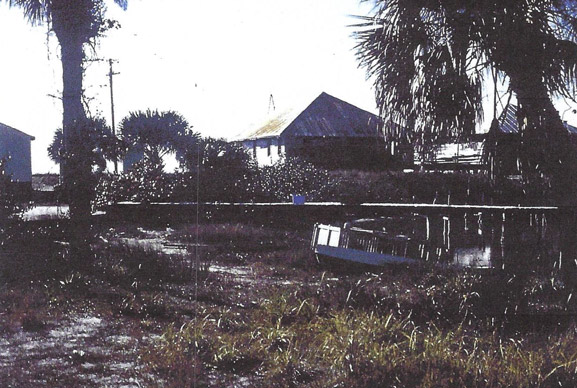 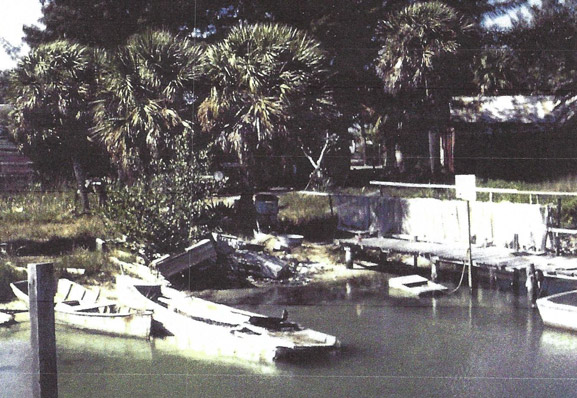 Interstate Commerce Commission rules in favor of abandonment of railroad. 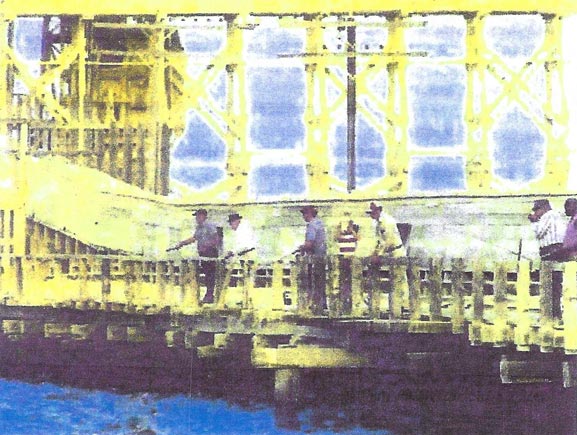 Plans Are Announced for Real Estate Development on Cole Island

Formal Dedication of the Shuckman Causeway

“Necessities” Opens at North End of Island (Later Named “Gills”, and Then Kappy’s)

Amory Chapel Deeded to the State of Florida by GICIA

Bancflorida of Naples Seeks Foreclosure on the Boca Grande Causeway

University of Florida conducts study to examine the “carrying capacity” of Boca Grande in an effort to determine present and future needs of Gasparilla Island.

More Than 100 Island Racoons Trapped and Moved to Pinellas County

Power House rebuilt by CSX Corporation and turned into community center for residents of Boca Bay.

“Loons on a Limb” Closes

Construction on Replacing the Swing Bridge Was Completed

Chief Blosser and firefighter Jeff Knowles proposes to Lee County emergency personnel a grid system in order to pinpoint exact maritime locations; currently in use throughout the State of Florida.

Small Scale Plan Amendment to the Development of the Fishery Property

Charlotte County approves ordinance to adopt a small scale plan amendment to the development of the Fishery property (13000 Fishery Road).

Landing on island was at 35th Street.

In 1980 the SCL merged with the Chessie System to form the CSX Corporation. Between 1972-83 there was also a joint-venture with the Louisville & Nashville Railroad named the “Family Lines System”.